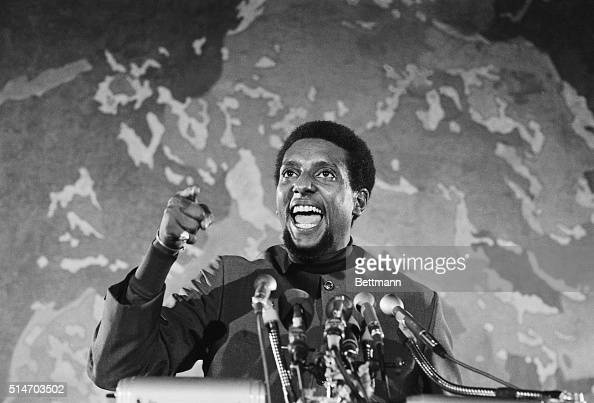 Kwame Ture was born Stokely Carmichael on June29, 1941 in Port of Spain, Trinidad, the son of Adolphus and Mabel Carmichael. Heimmigrated to the United States in 1952 with his family and settled in New York, New York.He graduated from the academically elite Bronx High School of Science in 1960 and made thedecision to attend Howard University. Howard University conferred on him a Bachelor ofScience Degree in Philosophy in 1964.

It was while in Washington that Stokely becamedeeply involved in the "Freedom Rides," "Sit-Ins," and otherdemonstrations to challenge segregation in American society. He participated with theCongress of Racial Equality (CORE) and the Nonviolent Action Group (NAG). He later joinedthe Student Nonviolent Coordinating Committee (SNCC) and was elected its National Chairmanin June 1966. While in Greenville, Mississippi, he along with his friend and colleagueWillie Ricks, rallied the cry "Black Power" which became the most popular sloganof the Civil Rights era. Consequently, he became the primary spokesman for the Black Powerideology. In 1967, he coauthored with Charles V. Hamilton, Black Power, the Politics ofLiberation in America. That same year, Stokely was disassociated from SNCC and hebecame the Prime Minister of the Black Panthers, headquartered in Oakland, California. Hesoon became disenchanted with the Panthers and moved to Guinea, West Africa.

While residing in Africa, Stokely Carmichaelchanged his name to "Kwame Ture" to honor Kwame Nkrumah, who led Ghana toindependence from Britain, and, Sekou Toure, who was President of Guinea and his mentor.For more than 30 years, Ture led the All-African People’s Revolutionary Party anddevoted the rest of his life to Pan Africanism, a movement to uproot the inequities ofracism for people of African descent and to develop an economic and cultural coalitionamong the African Diaspora.

In 1998, at the age of 57, Kwame Ture diedfrom complications of prostate cancer. To the end he answered the telephone, "readyfor the revolution." His marriage to Miriam Makeba and Guinean physicianMarlyatou Barry ended in divorce. He has one son, Bokar, who resides in the United States.